Skip to main content
In 1944, twenty one Trappist monks left Gethsemani Abbey in Kentucky and embarked on a journey similar to those originating in early Christianity. The trip led them to the wilderness of rural Georgia where they founded the Monastery of the Holy Spirit

Monasticism is an ancient concept that can be seen in many religions and in philosophies. Centuries before Christianity, the devotion to this life – which includes vows of poverty, chastity and obedience –  was practiced by great world religions such as Hinduism, Buddhism and Judaism. At the Monastery of the Holy Spirit, our focus is on the development of Christian monasticism.

Christian Monasticism resulted from the stories of the Prophet Elias and John the Baptist who both lived alone in the desert. Through the Old Testament, the desert was regarded as a place of spiritual renewal and a return to God.  St. Anthony the Great (251-356), who is generally considered the father of the Christian monastic family, was the first Christian to adopt the life in the desert, where he withdrew from secular society.  The Egyptian desert provided Anthony a place where he could live with the sole purpose of pursuing God in solitude, and his devotion attracted a circle of followers who wanted to live a similar lifestyle.

Anthony’s followers became a part of the Desert Fathers and Mothers tradition, and began the transition from isolation to loose-knit communities. The progression from hermit "anchorite" to monk "cenobite" living in community under one abbot soon followed. In Egypt, St Pachomius established the first Christian monastery in 346.

The Birth of the Cistercians

The Cistercian beginning was part of a general 11th century movement toward reform, characterized by the desire to detach from worldly entanglements to free the soul for the life of contemplation. Eleventh century monasticism was not decadent so much as it was wealthy, comfortable, and involved with the world, materially and politically. The eremitical life of the Desert Fathers therefore, more extreme than Benedict's, appeared as an antidote to complexity and involvement, hence the appearance of hermit-based orders such as the Carthusians and the Camaldolese (like the Cistercians, followers of the Benedictine Rule and members of the Benedictine family).

In this climate of readiness for renewal, new religious Orders emerged in the second half of the 11th century. The Cistercian order began in 1098 when a group of reforming monks led by Robert of Molesme, the renowned Stephen Harding, his friends Peter, and Alberic seceded to Citeaux, founded the abbey of Citeaux in Burgundy.

The Cistercian Fathers said their program was a return to the absolute observance of the Rule. In fact, they interpreted it somewhat freely and actually deviated from its letter in some points. But whatever they did furthered the life of contemplation and so observed the spirit of the Rule. What they achieved was a synthesis of the eremitical and cenobitical traditions. Their rigorous adherence to silence, to a greater degree than required in the Rule, for instance, was a means of achieving the "desert solitude" essential for the soul's openness to God's action, while simultaneously retaining the cenobitical principle of Benedict's community. Their penance was that common to the race: to eat your bread in the sweat of your brow and to bear one another's burdens. The monk's gift of self to God consisted chiefly in the gift of self to his abbot and his brothers. He proved his love for God by the love with which he obeyed abbot and brethren and dedicated his body and soul to praise of God, labor, reading, and meditating, as Benedict had originally worked out.

The communal emphasis is seen also in the way in which the "new monasticism" spread. There had been earlier federations of monasteries, most notably that of Cluny (itself a reform monastery in the tenth century) whereby the mother foundation kept control of the daughter houses. But when Citeaux had to send out its own new groups due to the great influx of vocations, the nexus between mother and daughter houses was set down in a "Charter of Charity" which assured the autonomy of the new foundations within a truly familial relationship.

Within fifty years of the founding of Citeaux, the Order numbered 339 houses, and at the greatest extent of the Cistercian growth in the fifteenth century there were more than 700 abbeys of men and 900 of women. Such magnitude, together with a general decline of spiritual fervor, the Reformation, political complications, etc., led to the need for another major reform.

In 1944, 21 Trappist monks departed Gethsemani Abbey in Kentucky to found a monastery in the wilderness of rural Georgia. They arrived in Conyers – an unknown place with a small Catholic presence– with the desire to form a new community devoted to God's word.

Together they built the magnificent Abbey Church, a massive concrete structure that took 15 years to complete, as well as many of the other buildings that stand on our grounds today. Guided by faith, they labored out of love for their new home, the Monastery of the Holy Spirit.

Before they completed the church, the Gethsemani monks lived in a barn on old Honey Creek Plantation nearby. At the time, the roads leading to it were covered with red Georgia clay and Atlanta was a relatively small southern town that seemed far away. The diocese was centered in Savannah, and the Catholic population of Georgia consisted of just one family residing in Rockdale County.

Over the course of its history, the monastery has lived through seasons of death and new beginnings, seasons of change and perseverance; seasons of joy and sorrow. Today, we rejoice and embrace a season of renewal.

Read more on the monks arrival in Georgia or the complete Historical Background of HSM from the book “Open to the Spirit" by: Dewey Weiss Kramer  [ADD LINKS]

The Abbey Church is a symbol of man’s relation to the divinity. Its structure figuratively reflects the lifestyle of the monks at the Monastery.

Monks were among the first builders to realize that architecture could reflect a lifestyle. They consciously formed their environment to further their way of life. Today, visitors to the Monastery can clearly see architectural details that enhance the Cistercian approach to life.

Cistercian spirituality is centered on a union of the soul with God.  It is important that the monks’ surroundings allow them to advance their essential task of contemplative prayer and meditation.  The key to such an environment is simplicity, which is why the architecture onsite is clean and stripped of unnecessary distractions. One of the main functions of Cistercian art and architecture has always been to discourage emotional, irrational reactions and to encourage a sense of composure.

Today, the church is a harmonious blend of tradition and modernity, which recognizes the significance of the original Cistercian ideals as a workable basis for monastic life.

The “builders” were the first generation of Trappist monks in Conyers, Georgia, whose labor of love constructed the building and place we now call home. They “came to the monastery seeking a life conducive to prayer and contemplation in seeking God and were quickly joined by the first group of entrants to the 'new' monastery who had come from all parts of the country. Collectively, this group is known as the first generation of Conyers monks.

Many people now come to visit this “concrete building,” drawn by its contemplative silence and beauty. They are intrigued by its vertical reach upward, which suggests an aspiration to Heaven. They see the large stained-glass windows that allow light to enter, transforming the blazing Georgia sun into rays of beautiful ethereal hues. When visitors hear of those early monks and their joyful labors, they see beyond the beauty and into the hearts of those devoted men.

A recent article in The Georgia Contractor and in a special 50-year anniversary publication by the ACEC named the Monastery of the Holy Spirit “Georgia’s Most Remarkable Concrete Building.

”The accolade is a fitting tribute to the magnificent monastic building that was built more than 70 years ago by a special group of young monks. 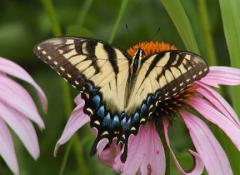