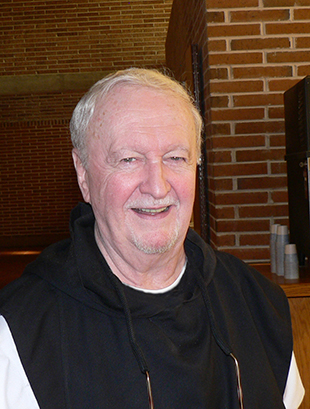 died peacefully in the monastery infirmary on Thursday June 1st after a long illness.  The celebration of the Funeral Mass of the Resurrection and the burial was on Monday June 5th at 9:00AM at the monastery church.

Father Ed graduated from Roman Catholic High School in Philadelphia in 1948. He received a bachelor’s degree in political science from La Salle University. Before entering the monastic life, from 1963 to 1973 Fr. Ed worked in the urban renewal department of the Philadelphia government.

Fr. Ed entered Our Lady of the Holy Spirit Monastery on April 10, 1974 and professed solemn monastic vows on September 8, 1979. He was ordained into the priesthood on April 9, 1983. Father Ed was known to many as the Mass Secretary an office he served for many years.

Condolences and memorial offerings may be sent in Fr. Ed's memory to:

For God so loved the world that he gave his only Son, so that everyone who believes in him might not perish but might have eternal life.  John 3:16

The Monastery is truly a destination for the entire family. Find out how you can make the most of your time during a visit to our grounds.