The Funeral Mass of the Resurrection and the burial took place on Saturday, May 14th at 10:00 AM. here at the Monastery.
Hundreds of mourners came to pay their respects including family members, Lay Cistercians, and a great many Nigerian expats from Atlanta who sang at his burial. His was the largest funeral ever had in this monastery. And well did Father Anthony deserve the glorious ‘send off.’
See links below to photo gallery and eulogy

Father Anthony Delisi was born on August 13, 1928 in Avonmore, Pennsylvania. He entered the Monastery of Our Lady of the Holy Spirit (Conyers) in 1948, made solemn profession in 1953 and was ordained a priest in 1954. Father Anthony was 87 years old, had been in monastic life for 67 years and 61 years a priest when the Lord called him.

Fr. Anthony made his first visit to Our Lady of the Holy Spirit Monastery on March 31, 1948. He entered the monastery in July 1948 at age 20. The abbot was Dom James Fox who was the first elected abbot of the monastery in 1946. At the time of his death, Fr. Anthony was the only monk who lived under all seven abbots in the monastery’s history.

His African sojourn - Father volunteered many years of service to the newly founded monasteries in Africa, training and forming native monks and nuns to the Cistercian (OCSO) order. His African sojourn  began when he volunteered to replace Fr. Tom Francis Smith, a monk of Conyers, who had been serving as priest and teacher to the Cistercian monks in Kenya, Africa. Father Anthony departed in 1979 for Our Lady of Mount Calvary in Awhum, Nigeria (Africa). He returned to Conyers after a short stay but was asked to return to Nigeria to be chaplain for a group of nuns beginning a monastery in Abakaliki, Nigeria. While in Africa, Fr. Anthony became sick with hepatitis and returned to Conyers in 1984 before returning to Abakaliki to oversee the construction of the convent’s chapel. He returned to Conyers for good in September 1987, returning to visit the Nigerian monasteries of Awhum and Abakaliki in 1995 and 2007. The experience in Africa was very dear to Fr. Anthony. He often described it as the best years of his life. In 2011, he wrote a memoir, Black Like Licorice: A Contemporary Monk’s Call to Africa. The memoir covers his youth, his early years in the monastery, and his experiences in Africa.

His Service to his community - Fr. Anthony’s contributions to Holy Spirit Monastery are immense. He was almoner of the monastery in the 1950s, delivering food to poor neighbors. His love for the poor would evolve into the establishment of the monastery’s current food bank. Fr. Anthony taught classes to the monks in Church and scripture, liturgy, and monastic history. While a student at the University of Notre Dame, Fr. Anthony became involved in the charismatic movement, renewing his own prayer life and the desire to help others grow in their Christian faith with emphasis on the workings of the Holy Spirit. Today the Cursillo Movement for men and women, which focuses on spiritual renewal, have retreats at the monastery several times a year, thanks to him.

The Liturgist - With his degree in liturgical studies, Fr Anthony was instrumental during the years of the Second Vatican Council and those following in guiding the monastery through liturgical changes. He organized liturgical meetings and oversaw the implementation of changes postulated by the dioceses and of the OCSO religious order. Father Augustine remembers Father Anthony the Liturgist.

The avid Gardener - Fr. Anthony loved to garden. In the early to mid-1970s, he helped to establish gardening as a profitable business for the  monastery. Despite a land once designated by a university agriculturalist as unfit for growing produce, he oversaw a garden consisting of squash, cucumbers, zucchini, eggplant, tomatoes, peppers, turnips, mustard greens, and kale. Although the gardening-for-profit eventually was discontinued after he departed for Africa, on his return he continued work on a fully organic garden for the community. During his stay in Africa he delighted in sharing his gardening skills with the monks and nuns as they developed their own gardening produce as a needed financial resource.

The Retreat Master - Fr. Anthony became retreat master after his return from Africa in 1987 and oversaw the hospitality given to retreatants. He assigned rooms, gave spiritual conferences, and met (upon request) with individuals seeking spiritual advice. He would serve as retreat master for the next 15 years. He became a valued spiritual director and confessor to many who came his way.

The loving Superior - One the most important service that Fr. Anthony provided the community was in 2002 when he was asked to serve as superior ad nutum (temporary superior) of the monastery following the sudden resignation of Abbot Basil Pennington. Fr. Anthony was officially 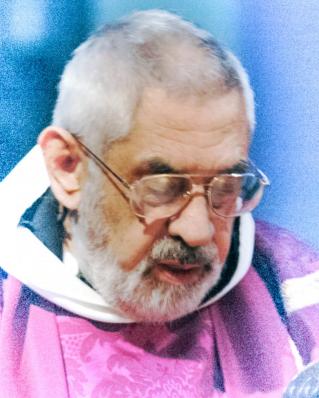 designated superior on June 7, 2002 by Dom Damien Thompson, abbot of Gethsemani Abbey. For the next year, he provided stability for the community by continuing the progress made by Abbot Basil in encouraging monastery economic growth.

The Writer - His weekly conferences to the monks provided spiritual support. His talks were collected into a book, What Makes a Cistercian Monk?  Fr. Anthony was a writer who wanted to share his spiritual insights with others. His books Praying in the Cellar: A Guide to Facing Your Fears and Finding God (Paraclete Press, 2005) and A Week of Waiting: Poems with Commentary (Shires Press, 2011), and the aforementioned Black Like Licorice - where he shared his reflections of his stay in Africa. (Trinity Press, 2011).

The Historian - Fr. Anthony collected arrowheads and became somewhat of a historian of the monastery property. He preserved an area of the property where slaves are buried. His arrowhead collection has been documented in newspaper articles such as “Evidence Ample That Early Man Roamed County,” Rockdale Citizen, October 4, 1988.

The Lay Cistercians' beginings - In 1987, Fr. Anthony and Abbot Augustine Moore helped five laypersons to establish the Associate Oblates of Our Lady of the Holy Spirit. The group would evolve into the first United States Lay Cistercian community. Lay Cistercians are devout people wanting to lead a prayerful life in a secular world. They have spiritual practices similar to those of the monastic community albeit limited by the reality of their daily lives. As laypersons, they strive on a daily basis to live the characteristics that define the monastic living. They are associated with the Monastery who supports the group by prayers and by providing a monastic advisor who guides them. Father Anthony founded and shepherded the local group. Today the group numbers 80 and from this original Conyers group 6 daughter communities were formed mostly located in nearby Florida. The group meets monthly to learn and grow in the ways of the contemplative life. Fr. Anthony’s conferences to the group and his counsel to individual members in the last 29 years have touched hundreds of lives.

His later years - In the last few years of his sojourn amoung us, Father Anthony was the official greeter at the visitor center. He welcomed guests, answering their questions about the monastery's museum, bonsai gardens, retreats, and natural burial ground. He blessed religious items that visitors purchased at the abbey store and often blessing the visitors themselves. Eventually the word got out that Father Anthony would hear confessions while on duty at the visitor center, which he gladly did. Between visitors and confessions, he made rosaries and took pleasure in training the volunteers in the holy art of making rosaries.

He is survived by 5 "immediate" devoted nephews and niece - Anthony, Antoinette, Joseph, Carl, and David, and lots of cousins. As the patriarch of the family, in recent months Father Anthony lovingly collaborated with some of his kin in the putting together of their extensive Delisi family tree with its many branches. He delighted in sharing this rich history with his brother monks.

Links:
Photo gallery of Fr. Anthony's sojourn...
Photo gallery of Fr. Anthony’s funeral…
Father Augustine remembers Father Anthony the Liturgist.
Planting seeds of faith:.. In the news
A notable condolence… from a very dear friend
Eulogy for Fr. Anthony... Listen to Abbot Francis' Homily/Eulogy. Click on May 14th
Video of the burial...
Father Anthony Delisi, ‘the one who invited people in.’ In the news - Georga Bullein

Memorial donations may be sent in Father Anthony's memory to:
The Monastery of the Holy Spirit, 2625 Highway 212, SW, Conyers, GA 30094-4044
You can also use our secure online portal for donation.

Eternal rest grant unto him, O Lord, and let perpetual light shine upon him.
May he rest in peace. Amen.