My Stay at the Monastery of the Holy Spirit

To give a little background, I am currently a graduate student still attempting to figure out what my vocation is on a daily basis. My general philosophy of life has been to experience the world in order to gain a better understanding of what universal truth truly means.  In one way or another each experience builds perspective on a certain concept at the base level, whereas the experience also in effect sheds light on the foundational truth that I believe everything is connected to. Having the opportunity present itself after some research into monasteries in the area, I decided that the Monastic Guest Program was a way in which I could tune myself into the world and my relationship with it. The description of the program was straight forward – a complete immersion into the life of a monk on a temporary basis. Off the bat I knew that it would be a way to further stretch my spiritual self in an effort to grow in a more holistic sense. In the end I hoped that the experience would allow me to discern who I was and which direction I should take as I feel that I am at an apex, where each little minute shift in trajectory now could lead to drastically different lives lived.

My first true glimpse of the monastery and the monastic life came during my 5–day interview stay.  Having never been in a monastery of any sort I didn’t know what to expect, other than the stereotypical characterizations of monastics that I had received through the media. Misconceptions were cleared up as I began to enter into the life of a monk during my short 5-day stay. I began to see broader themes found within the monastery of: silence, community, and prayer. The interview stay gave me a more accurate overview on what the guest program might entail. Not only was the community to see if I would be a good fit for the environment, but I myself began to question if I had what it took to be encapsulated in the monastic way during what would otherwise be my winter break. Though the interview process was casual, I saw how it was a well-reasoned buffer to those that may not be ready to enter into this countercultural realm.

Having previous knowledge of the code of conduct found within the monastery, I decided to jump right into the monastic life as soon as my program began. Rather than looking for a strike of lightning from God Himself, I was more apt in pursuing an authentic monastic immersion. I wanted to learn more about why for thousands of years people have pursued this way of living.  The usual day would start with wake up at 3:30am in order to make the first of five divine offices that the community carries out. Between the periods of the divine offices there would come intervals of: work, isolated prayer, and meals. Not only did I practice the regimented life of a monk while in the monastery, but I also explored the intricacies of the monastic life through various means. I would speak with monks within the monastery regarding the long history of monasticism that would eventually lead to the creation of the Cistercian order and having them set up this monastery in rural Georgia. Other times I would envelope myself with various aspects of the order through books that the brothers would recommend. Throughout the entire program I would also try to get into a rhythm of prayer with everything I did. Whether it be the repetitive packaging of fudge – a way that the monastery financially supports itself – or being in silent prayer in front of the Blessed Sacrament, I would try to remain in constant conscious dwelling of the Holy Spirit’s presence. Increasing my mindfulness of Christ’s presence in everything would become the key take away from my experience from the program.

To a person who stands outside the walls of the monastery, the action of a repetitive life of work and prayer seems to be monotonous as the life continues day after day until death. But through my experience I found it to be quite liberating as there was a rhythmic pattern developing within my psyche to remain in Christ. Falling in step with the schedule in time began to come easily, as the body and spirit would naturally be lulled. This habitual formation within the heart then left me free from the many choices that are often presented with an open schedule. Rather I became freer to focus on what I was called to do in this world as the patterned schedule met the needs of both the body and spirit through its regimented doses of prayer, work, and nutrition.

Another fruit of the patterned lifestyle was a present state of mind.  The idea of time being a manmade concept became very apparent within the monastery. Instead of looking to complete a task or activity as quickly as possible I began to focus on the beauty of each gifted moment.  This present state of mind seemed to be an automatic conscious response to the cyclical lifestyle or the lifestyle would cease to contain meaning. The meaning brought forth behind “being present” was larger than I had ever expected. It meant appreciating where I was at and what I was doing, as everything in itself contained a lesson to be learned through the experienced present life.

Though the experience was positive on my own life journey, I want to emphasize that there is a price for true resolved peace of the heart. The silence in  which the monastic life is grounded leads one to allow Christ to reach further into the depths of one’s own heart and psyche. This will inevitably lead to suffering as the love of Christ penetrates a heart hardened by experience from a world that is has its fair share of pain and hurt. The monastic way of life is conducive to this sort of analysis, as distractions are limited and the Hound of Heaven begins to cultivate a softer heart. For myself struggle with letting go and realizing deeply seated crosses need to be addressed rather than ignored. From this suffering I believe true redemption takes place as the process of self-purification is realized. Prayer and life in this sense gained a quality that I had never imagined. We are meant to lead a struggle on Earth as we await eternal life, in which we have to be in a constant pursuit of loving more truly and dearly as walk this path.

The monastic guest program did not yield any secrets to what life meant that I could relay but rather it further led me down a road of constant inner conversion. This is best experienced rather hearing it from the words of another. I advocate for others to experience the world and question truth in this light, for that is where they will have a deeply seated foundation to lead a fruitful life. The silence found in the walls of the Monastery of the Holy Spirit allowed me to realize that there are larger aspects of living than just what is stated in the literature. Life is meant to be lived; you can only doing so much reading before you too will have to take a leap of faith to understand universal truth that is very much apparent in the world we live in.

Is the Cistercian Monastic Life for you?

Intrigued by the monastic lifestyle? We’ve recommended readings to help you gain a deeper understanding of the community and discernment. 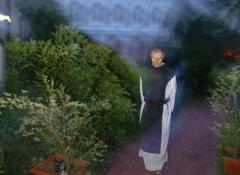 You can learn more about our life at our American Region's website. It has a Newcomer's Guide to Trappist life, Steps to Becoming a Monk or Nun, and much more information about all our Cistercian monasteries in the USA. American Region's Vocation Website: /www.trappists.org/